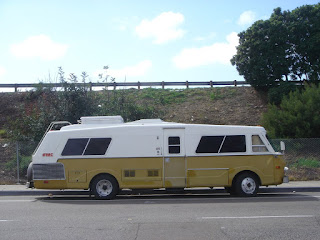 I was curious about this one so I did a little research. FMC is an acronym for Food Machinery Corporation. Aside from making "food machinery", FMC built military vehicles and for a short time motorcoaches. FMC motorcoaches were built from 1973-1976, sold for 27k-54k and a handful were bought by celebrities such as Mario Andretti, Clint Eastwood, and Charles Kuralt. This one looks to be in nice shape and resides in San Diego, CA, not too far from the original assembly plant in Santa Clara, Ca.